I thought I would share a letter I wrote on September 11, 2001. It's kinda long. I'm always long winded or I guess in this case long penned. This is how 23 year old Coco saw the world on that day.

I'm writing this for my future. For my children, grandchildren, etc. For everyone after me so when you read about "The Day Death" or "Attack on America" you will know what it's like through my eyes.

I'm 23 years old and living in Indianapolis, Indiana. Before we talk about 9-11, let me tell you about life just days before. You never realize how safe you fell until it is all taken away from you. You could travel anywhere in the world anytime you wanted. I never thought of terrorism in the U.S. It never crossed my mind. Saturday, I went to a college friends party. We all sat around talking and laughing. On Sunday, sis and I went downtown and out to eat.

On Monday, I laid out by the pool all day and went to a bar for drinks at night. The biggest problem that day (the day before) was that we didn't think there were enough cute guys at the bar. Now, our biggest problem is how to feel safe again.

When we look back and people ask me where were you when...I have to honestly answer that I was asleep. I woke up and never turned on the T.V. or the radio. Like most days, I gathered my laundry, grabbed a bathing suit and headed over to mama's house.

I got into the car and turned on the radio. The voice said, "Brownsburg's schools have been locked down." I had no clue why. At the time I was only 2 miles away and I was trying to figure out what they were talking about.

The voice kept saying, "Everything will be O.K." Later I would find out how NOT O.K. everything would be.

Today, terrorists hijacked four planes. It was the most terrifying sight. Everyone keeps saying it looks like a scene from a movie and it does. The plane just ran right into the World Trade Center. It left a huge whole.

The first plane hit Tower One and everyone just thought it was a horrible accident. While all the news camera were on the first tower, another plane crashed into the second tower. We sat there and watched a second plane come around the corner and just plow into the building.

While still in shock and trying to sort out what just happened, another plane crashed in to the pentagon in Washington D.C. Even more people were dead. The nation was on edge as we found out a fourth plane had crashed in Pennsylvania.

At this time, no one knows why the plane was in Pennsylvania.  There were 266 passengers, pilots and crew members on those four flights.

Everyone is baffled on how four planes took off about the same time an all got hijacked. They used three airports and two airlines, nothing makes sense. This had taken a lot of planning. Years and years of planning.

President Bush has ordered all flights grounded. Sixty planes had to landed at Indianapolis airport in 90 mins. People basically are stranded where their plane landed and will be until we resume flying. All the planes coming in from other countries had to turn around or land in Canada.

I'm sitting out side now looking up at the most beautiful clear sky, an empty sky.  What clouds that are in the sky are so thin and so white. The sky is such a deep blue shade and it looks different today. We are by a small airport and would normally seen many planes and helicopters. It just oddly silent.

I sit here and I feel guilty. I'm 1,000s of miles away. It doesn't seem fair that I'm going on with my day and so many people have been killed. Lives have been lost and turned upside down.

At this point, we don't know how many have lost their lives. The amount of missing could be more then 1.000. There are so many missing police and firemen...so many liven taken for no reason.

My letter was five pages long, so I edited it. I'm going to put it back in it's folder. The folder with magazine covers and postcard my boyfriend at the time sent me from Italy. I'll put it back in its proper place, so I can read it again next and remember! ALWAYS REMEMBER!

Posted by AlmostGemini at 7:46 PM No comments:

Not gonna lie, I was trying to think of a way to make flowers cooler! 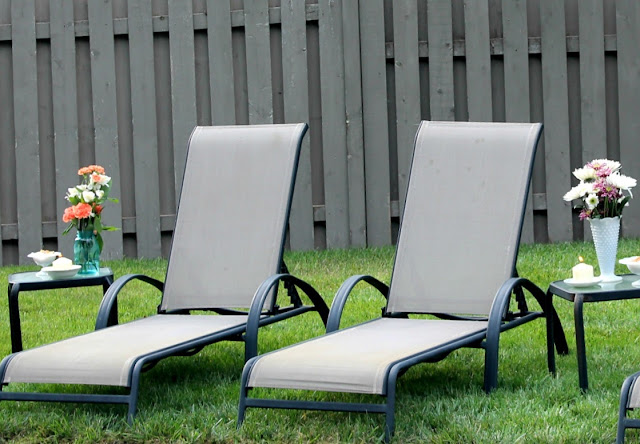 Incase you wanted to take a load off (pass out) we had the pool chairs waiting!

Posted by AlmostGemini at 8:08 PM No comments: