Due to my extreme love of vintage Christmas and the desire to collect everything with Santa on it, I've been going through all my "old" things to make room. I wouldn't consider myself a hoarder as much as a pack rat! I love to keep, let's call them "moments". I've been taking pictures and collecting moments since the second grade. For those of you who remember, you used to not be able to see what your picture looked like until you took it to be developed. There were no re-dos and most likely, you got double prints anyway. Needless to say, I have cleaned out pictures of nothing and people I don't remember. I still have a ways to go!

ANYWHOOO, while looking through box number one, I found a note that I wrote when I was13. I actually remember writing this note at Camp T. Now for the record, I have not yet googled what the drug is on the paper. The dadster is a RN/ medical writer so it had to come from him.

With Martin Luther King Jr. day coming up I thought it was perfecting timing.


Before, you read my "believes" I want to make sure you understand I am in NO WAY comparing my child self to Dr. Martin Luther King, Jr. He was an amazing leader and activist. He did more then I could ever imagine doing but he is an inspiration to me. He wanted to make the world more equal in non-violent ways and that is something I believe 100%. I don't agree with his "guaranteed income" but I can see where he was trying to go with it. 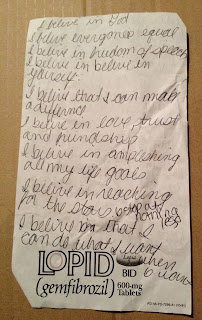 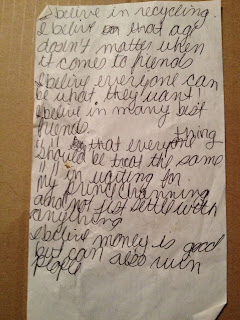 My, my, little CoCo you are a wise one! Sometimes I want to go back in time and just hug that little girl. I want to tell her that 20 plus years later, she will still have the same beliefs. That those still define who we are today, and who we will still be in the future. I would also tell her that prince charming is just a character that Disney made up but still don't settle. When you are 34 (and stayed single through your first divorce) you won't regret not settling for any of the guys you have dated. Oh and don't expect to get any better at spelling but it won't matter because someone is going to invent spell check!


How has Martin Luther King Jr.'s story influenced your own?

AG
Posted by AlmostGemini at 1:46 PM