A Few of My Favorite Things

How did we get talked into laboring on Labor Day weekend? Since sadly the rain choose to RUIN our plans of the pool and grilling out, Mama and I got bored. (Something that happens easily)!  She and The Dadster have been talking about downsizing for YEARS! As we say good bye to summer, the talk of "never spending another winter in Indiana" is again a top topic at the U household! I would like to add that this will be the 8th year the rents have been gone to Florida during the winter. I guess November to Dec 1st and March to May is too much for them to handle! HA

Moral of the story, it was Friday, it's raining and we are bored. I (still pondering why) asked mama if she wanted to clean out her closet. This didn't come out of the blue, mama had told me she wanted to do it before she left for the winter. She is wanting to get rid of some Christmas stuff since we haven't been home for the holidays in years. We also have a lot childhood toys at her house and she wanted us to go through them.

It took six hours, we had three rooms filled with stuff.  Just as we learned from watching many episodes of "Clean House", (hosted by non other then one of my faves Niecey Nash!) we had a keep room, a sorting room, and a get rid of room.

So the cleaning part wasn't as fun as the sorting part. We found letters and cards we had written and received. We laugh so hard about a post-it Sis wrote, telling mama that she had left to go corn detassling and would clean her room when she got home. If she was "still alive". Or when I listed my three favorite places in the world as Maui, Target, and Caselton Mall?!

I thought I would share with you (and hopefully bring back some memories) of what we found!

Of course, I didn't have my camera with me, so I had to use my phone which means smaller, not so great pictures. Sorry, but s*&t happens!

So I ask all you! Do you remember these?

The magical musical thing! Not a guitar, not a piano, not even a keyitar. Just a thing! We didn't' have batteries so we are not sure if it works but it was a keeper! Next time we go through our stuff, I'm going to make sure to have a 9 volt battery on hand! 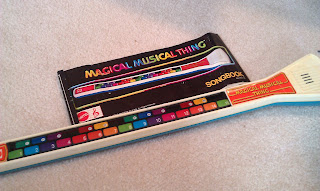 If you know something better then "The Muppet Show!" and "Talk-To-Me" please let me know! We did find D batteries and the DOES work! It was so fun! 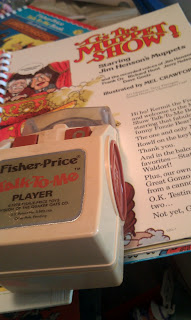 I would like to put a vicious, vicious, rumor to rest. As we were going through all of our stuff, I found all my Cabbage Patch Kids birth certificates.  I did not REPEAT. DID NOT, name all my CPKs after myself. I only had one Courtney Nicole, Jr. and a boy named Corey Nicholas. So for all of those sis has told I named all 9 of them Courtney Nicole, It is not the truth! I can even produce the birth certificates if Congress should ever ask. 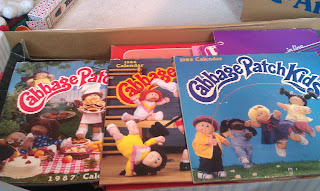 We had EVERYTHING Strawberry Shortcake. This was a swing that we had, we also had the picnic strawberry, the butterfly that the dolls could fly on and the snail that pulled the strawberry carriage. FYI, they all still smell. I know I thought it was amazing too! 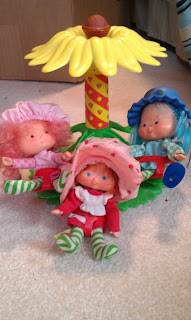 I would please like a show of hands for everyone that had and loved charm necklaces. I would never sell these but I bet I could get a lot of money! Brandi, Jamie, Val and I collected these at the Bluffton Street fair! Mostly likely, right after we ate a zum stick and fish sandwich! 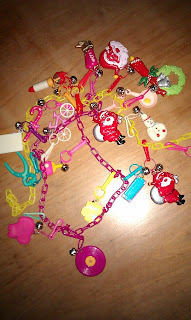 Look who loves me! My mon chi chi. 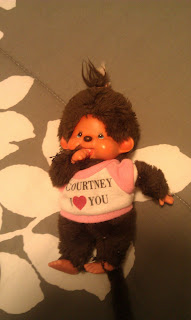 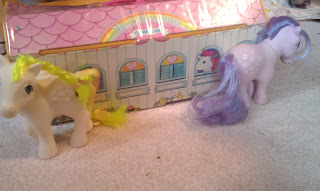 Annie was my FAVORITE! I WAS Annie. Along with these figures, I still have Annie tape (yep tape as in scotch) bookmarks (which I now have one in the book I'm currently reading) and many other fun things! 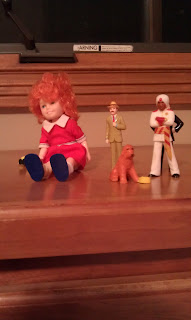 These are just a few of my favorite things.

We also have Carebears, Carebear Cousins, Hello Kitty, Twin Stars, and much much more!

Dadster and sis got bored with us and our toys shortly after we started. As they sat on the couch, watched the DVR and played on their cell phones, mama and I were lost in the past. We played dolls and ponies.

We read letters that we wrote, we teared up missing people of our past and can't wait to share the funny stuff with people in our present. Due to being pack rats aka sentimental saps, we still have some ALOT an insane amount of fun stuff to go threw. If sometime in the future you get a package from me...Open it up, it might just be some shared memories!

Posted by AlmostGemini at 1:37 PM